It was a beautiful winter’s day last Saturday; the sunshine, clear sky and still crisp air created perfect conditions for a walk. It was glorious to feel warmth and explore parts of East London I hadn’t seen before, at least not in the daylight. It was a joy to pause and take the time to consider the street art that Shoreditch famously boasts, as well as fuel up on the tastiest vegan hot dog ever, seriously. You can find the vendor situated on the corner of the vintage market but can also be accessed on Scalter Street. This was not a wholly tourist wander though; I was making my way to Bethnal Green for the Mindful Drinking Festival. 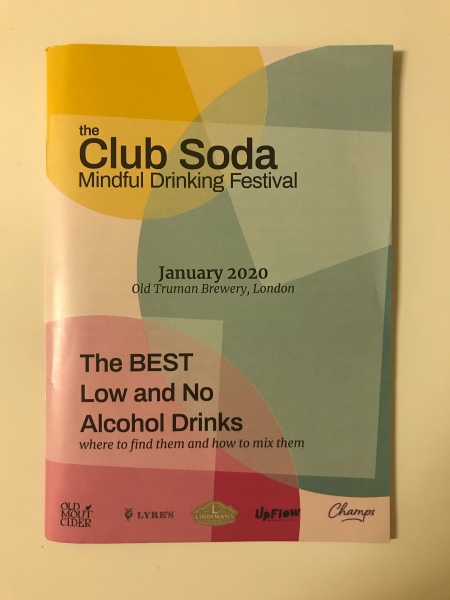 The brochure packed full of exhibitors

Organised by Club Soda, this was the first time I’d be attending this annual event. I hadn’t heard of it before, but the concept of mindful drinking hadn’t been on my radar either. This time of year is advantageous for the hosts since Dry January has gained popularity with the growing number of ‘sober curious’ people looking to balance out the usual festive indulgences in December with healthier habits for the new year. Alcohol is so normalised in our culture it can prove very difficult for many to maintain sobriety or just to moderate their consumption if they choose to cut down. Luckily accessibility to alcohol free drink alternatives and the available range is increasing. I was still surprised by the size of the event though. 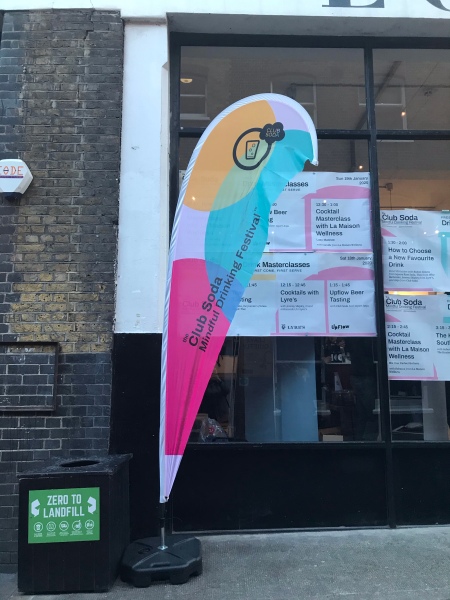 We nearly missed the minimal signage outside

I didn’t know what to expect really; I thought maybe a few stalls, probably mostly brands I knew or had tried, and more likely than not a lot of Kombucha on offer. I was blown away by the volume of exhibitors as well as how busy it was; so much to see and try as well as friendly vendors to chat to. Ascending the stairs by the entrance there was a small table offering samples of Sparkling Tea by Fortnum & Mason, and what a glorious refresher it was. Doing a quick loop of the whole event, we discovered it spread into separate areas of Ely’s Yard as well as the building next door for scheduled talks. There was really something for everyone.

Studying the timetable my friend and I noted we were just in time to attend a talk by Janey Lee Grace, a multi-faceted talent in the world of publishing and broadcasting, but also the creator of The Sober Club. She spoke about her own journey to sobriety over the last couple of years as well as the general misinterpretations surrounding going sober. 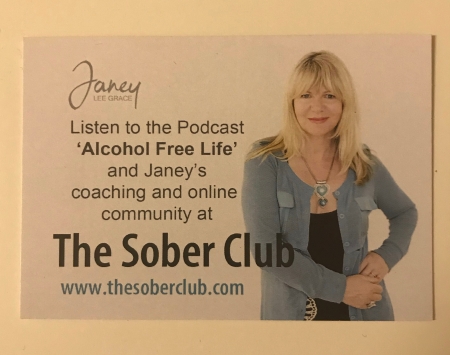 I would agree that generally there is an impression that a person becomes sober because they are an alcoholic or have reached some sort of distinct rock bottom. Grace told an interesting and incredibly relatable story of being what is now called a “gray area drinker”. (A term coined by nutritionist Jolene Park in a Tedx Talk. Check out her website here)

This is a space occupied by many of us, somewhere in between the extreme bottoming out associated with sobriety and casual once in a while imbibing. The zone in which you are still functioning, you’ve not been arrested as a result of over indulging, lost a job or feel physically dependent on alcohol; where the buzz acts as part of a reward system. The danger lies in this buzz becoming what is relied upon to feel happy or relaxed; where one’s habits could increase incrementally and over indulgence is explained away by a season, or occasion.

I had not heard such a distinct description before and it was very enlightening, and encouraging, knowing I wasn’t alone in that in-between space. I could relate to Grace talking about alcohol playing a role in her ‘self-care’ and we all gave suggestions of our own personal alternatives. She also discussed how tricky that term had become and its association with an inaccessible ‘wellness’ clique and how taking care of yourself shouldn’t be an exclusive or expensive marketed enterprise.

Sharing about her sober experience further, Grace mentioned how many of us had been drinking since our teens and in all likelihood our emotional maturity could essentially be stunted in that stage, increasing our reliance on alcohol in order to function. Sobriety afforded her the chance to uncover the layers of who she really was; a potentially daunting but ultimately exciting venture.  I can definitely say I’ve discovered layers to my own self during my sober months and I look forward to what else I may discover given time.

Grace’s ultimate message was one of kindness and inclusion, and while the talk was pro abstinence, there was by no means an ‘anti-drinker’ mood. It gave me much to consider as we made our way back to the exhibition areas for what would be some epic sample tasting.

Some well-known names including Brewdog, Adnams and Old Mout Cider had their recognisable branding on show, but the variety prize had to go to Big Drop Brewery. Already a favourite, we sampled the fantastic IPA and a fruity raspberry brew which was not quite what my palate was expecting. If sours are your thing I reckon it would be marvellous but it just wasn’t my speed. They were generous in giving us loads of brews to take away as well as a t-shirt and bag, what a win. 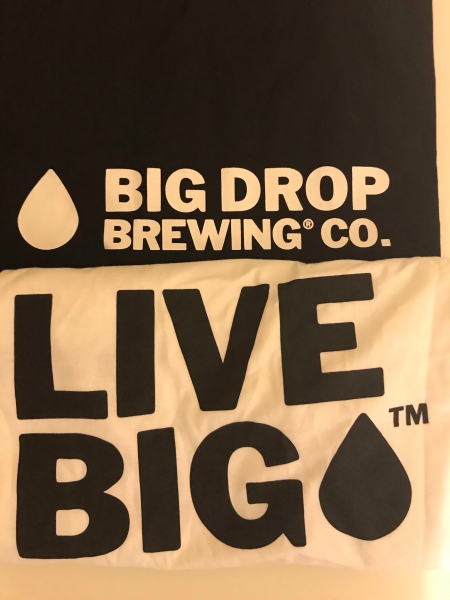 We also investigated the Becks stand, not necessarily for the Becks Blue which I’m not really a fan of, but because they also market an alcohol free version of Leffe (which is so tasty) as well as a brand I’d not heard of, Jupiler. The standard lager in Belgium, my friend had tried the 0% version once before and raved about it, she was not wrong. Both brands are available online and something tells me I’ll be ordering before long. They were also kind enough to give us a bottle of each which we were more than eager to accept. 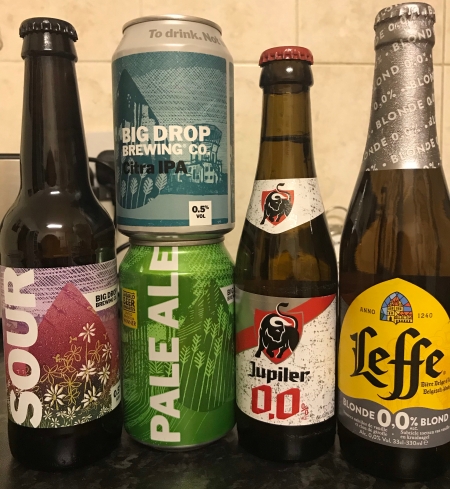 I have not explored the world of alcohol free spirits and was curious use the festival as an opportunity to avoid buying a bottle of something that turns out to be better tasting in my head than in reality. Again, I was pleasantly surprised. Caleño, an aperitif launched recently by brand Seedlip, would delight any Aperol Spritz fan. It had a wonderfully complex combination of flavours, warm and bitter with a lingering vanilla like finish which gave it an extra layer of special. 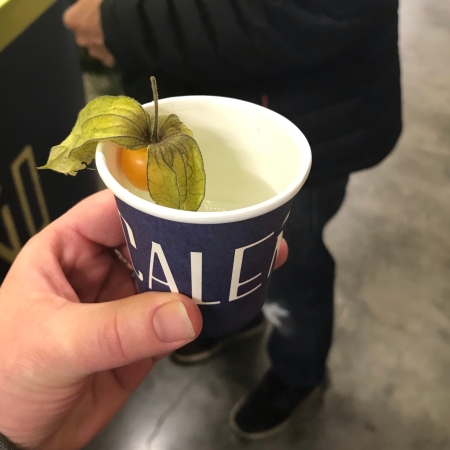 My sample disappeared shortly after this was taken

The Lyre’s Bar was one of the more impressive set ups in the space, and their friendly bar tenders were more than happy to mix one and all a mocktail, the taste however proved the scales tipped slightly more in favour of style rather than substance. We sampled some expresso martinis, and while refreshing, fell a bit flat compared to the real thing. There was one absolute stand out sample which tasted like a game changer. 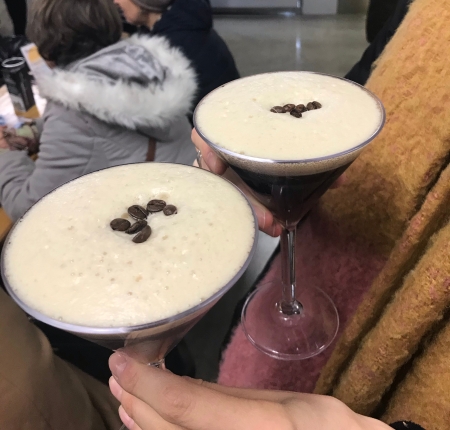 Wild Life Botanicals is a new brand of sparkling wine who are still infiltrating the market so also only available online, but they are definitely one to keep an eye on. Their range of fizz was genuinely, hands down, so much like the real thing I had to keep looking at the label to make sure they weren’t. Fresh, fruity, crisp and with just the right amount of fizz I could very much see myself sipping some on a picnic blanket in the sun, or keeping a stash of bottles to grab whenever there was a celebration to be had. (I recommend the Nude varietal) 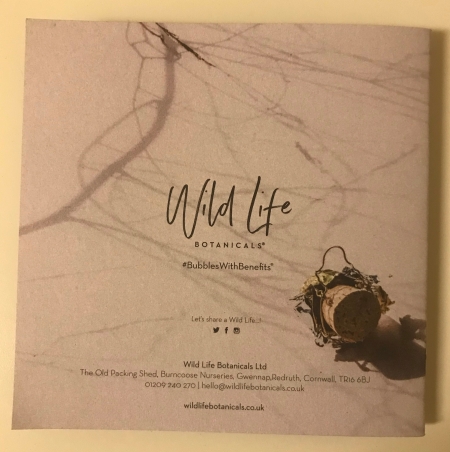 Keep an eye out for these gorgeous bubbles

We finally reached ‘peak sample saturation’ and we took our swag for a coffee (and cake at the ridiculously lovely Vida Bakery). The market is truly broadening for the non-drinker and seeing the expansion among big brands and the number of new companies raising the standard and increasing the variety can only be good. It was great to see the enthusiasm of other attendees as well and know there is a much larger tribe of sober and sober curious people out there. I made my way home with a cake doggy bag, food for thought and very happy taste buds excited about the sober start to a new decade.