July 18this celebrated as Mandela Day back home in SA (as briefly mentioned in We Got the Love). In short this initiative was launched in 2009 while Nelson Mandela was still alive. The date chosen was Madiba’s birthday, and commemorates his 67 years of activism (at that point in time) by asking all of us to dedicate 67 minutes of our time improving our immediate environment.
Being away from home at this time I only remembered this initiative later on that day this year. It was actually a little video on the internet that prompted me. It was a Timeout magazine short about some artists (from a group called Global Street Art) that had spray painted a mural of Madiba on the side of a building in Mandela Street in Camden. I almost squealed with excitement since I work nearby so headed straight down as soon as my day was done. 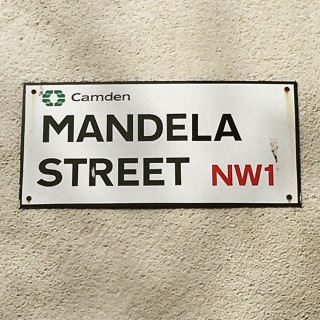 I didn’t even know there was a Mandela Street, especially one so close that I have actually passed many times. Turns out, this street housed the African Nation Congress (ANC) headquarters in the 80s. I had just learned that fact when a series of memories suddenly slotted into place in my mind as I walked the side roads of NW1.
About a year ago, I remembered going out for a celebratory lunch with colleagues at a pub somewhere and as we slowly made out way back to the office we walked by a house on Lyme Street with a blue plaque. Turned out a name I remember from my childhood was on that plaque – freedom fighters Joe Slovo and his wife Ruth First had lived at that address. I took a few moments to appreciate their efforts and sacrifice, messaged some family members about my surprise discovery and left it at that. I’d also learned along the line somewhere that former leader of the ANC Oliver Tambo had lived in Muswell Hill (also North London) while in exile. 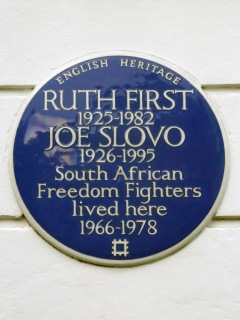 Walking towards a mural of one of my heroes made me feel rather far away from my birthplace. It was comforting to realise that I was also in fact surrounded by pieces of home and my country’s resistance history was always just around the corner. I then started thinking of my own family’s history. My mum had lived in Camden (in flats around the corner from my office) in the 70s while working in London and an extended relative had done a little family tree research, discovering that my mum’s side had actually lived in Tufnell Park (the ‘next door’ suburb to Camden) for at least a generation.
Joining all these dots together at once for the first time was almost emotional. I have always been drawn towards this part of town, which I put down to a kind of pilgrimage for my teenage goth self, but it turns out it’s a much bigger and more meaningful ‘homecoming’ than I’d ever previously contemplated.
Approaching Mandela Street and then finally seeing the mural itself was even more heart-warming. After ten years in this massive city it had never felt more like home. Seeing that giant familiar smile on the side of a brick building beaming down at all of us could only make me reciprocate with a grin. It felt like the same grin I couldn’t wipe off my face after meeting the man himself as a child. He shook my hand, looked directly at me and said ‘Hello, how are you?’. He said this to all the people he was meeting on that day, but for that moment he made me feel like the most important one in the room. I’d not thought about that in many years either.
I took some pictures, pondered the mural for a few minutes and then turned around to head home. My head was whirling with memories and thoughts of missing my friends and family in SA, but also how I’d established myself in my chosen home (and how much fun I was having). That silly grin stayed on my face until I got back to my flat, realising that this was indeed home, and a piece of the home I was born into was indeed always just around the corner.