Mass display was a concept I first heard about in high school. As part of gym class, across our year, each class was to create such a display to perform in front of the whole school. The point of it is still lost on me, but I remember my class needing some explanation as to what was expected. 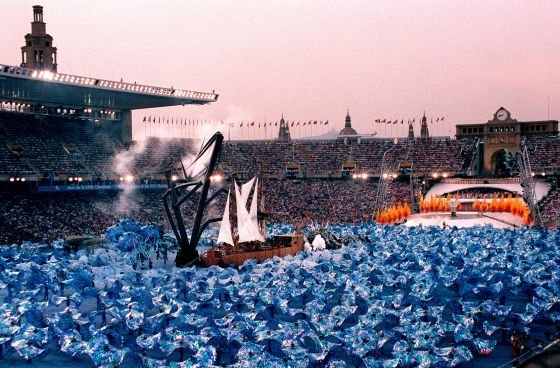 We then designed and executed a tongue in cheek display inspired by the film Trainspotting which included music from the soundtrack and all of us wearing swimming caps. The teachers either didn’t get it or weren’t very impressed, but we were proud of our achievement.

Having left that experience in my youth, I was surprised to have another opportunity to stand among many for a similar sort of mass art display. Organised by Artichoke, the event titled Processions is scheduled to happen in June across the UK and will commemorate the work of the suffragettes in securing the first votes for (some) women a century ago.

In advance of this event, workshops have been held to hone banner making skills for those attending. What better way to challenge my mediocre sewing skills than by signing up to one at the last minute. Before the event itself, along with my friends who are also attending Processions, we planned on having our own crafting session to make our banners, but considering our lack of experience I thought it wise that some of us attend something official as a ‘reccy’ mission. 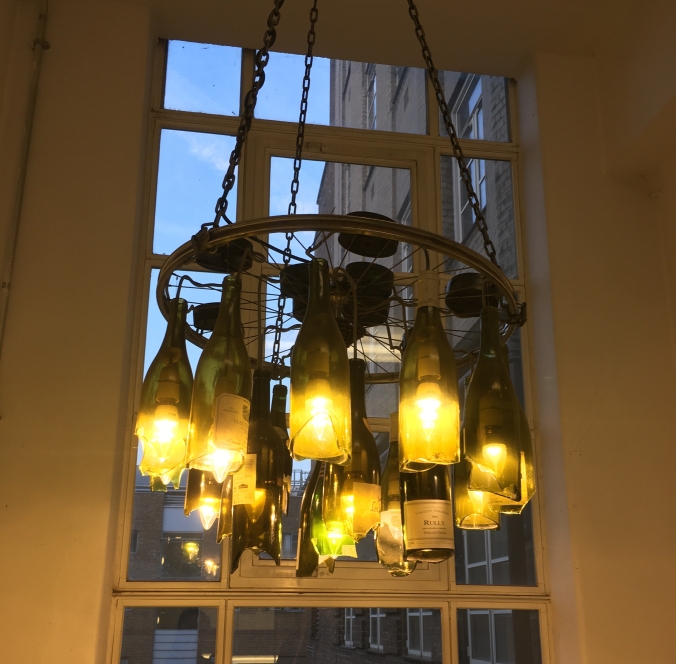 Inspiration in the stairwell

Furnished with fabric and all means of embellishments in the suffragette colours of green, white and purple, we were given the option of making individual banners, collaborating on a large banner already designed or, for the brave, to freestyle on another large banner.

Deciding on individual banners my friend and I got to work on what designs we would want to wave about on the big day. Inspired by the idea that women’s rights are about equality, which in my mind plainly makes them human rights, I decided to go bold and simple by emblazoning the word ‘Human’ across my banner.

My friend took inspiration from a recent discussion where another female friend asked some men, expressing doubt that feminism was still needed, how often they put their keys in between their fingers as a safety precaution while walking alone. Common practice for women, but something that surprised these guys since they had never even considered taking this kind of action. Since my friend could actually sketch I said she should draw a fist armed with keys which would make a strong statement. 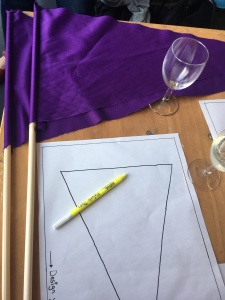 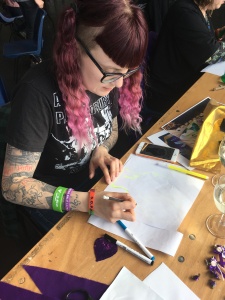 Still afraid of a sewing machine and wondering how long it would take me to hand stitch everything onto my banner, I was grateful to get my hands on fabric glue, which has become my favourite accessory. I must also admit that this new friend will probably delay me properly threading and using my sewing machine by at least another year.

Quite proud of what we managed to achieve we decided a post workshop drink was in order since our self designated crafting prowess was indeed worth celebrating. 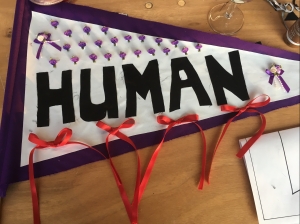 Adding some red to acknowledge the Suffragists 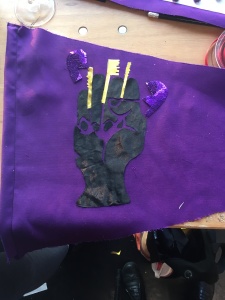 We carefully packed away our still slightly wet and delicate projects and perhaps a few extra of the available accessories just in case anything needed a touch up before the day. We walked towards Shoreditch, probably looking a bit odd, each carrying a long strip of wood which would bare our banners. I couldn’t resist waving mine a little, which sadly made it almost snap at a weak spot resulting in us both howling with laughter. We’ll definitely take that lesson to our own banner workshop in a couple of weeks.

Processions will take place on 10th June in London, Edinburgh, Belfast and Cardiff. There is still time to sign up for anyone who wants to get involved by clicking here.

One thought on “Banners”

I was on my way out of town when I glanced behind me and was reminded of just where I was. A sudden mix of gratitude and sense of accomplishment followed; returning a kind of smile I’ve been missing for a long while. #simplethings #gratitude #patience #nevergiveup #bepresent
When you realise the baby jumpers you’ve made are inadvertently giving Pride vibes 😍 #pride #translivesmatter #lgbtqally #transpride #rainbowflag #homemade #charityknitting #knittersofinstagram
Always remember to wear your mask… #guerillacrochet #postbox #seeninlondon #southwestlondon
Summer cygnets #summerinlondon #naturereserve #wetlands
I visited the green man,
I’m being watched… #knitsquad #homemade #madewithlove #knittedfriends #funwithtoys #homemadegifts
Feels like Christmas in July #tinselyarn #newprojectcomingsoon #sparkly #shiny #madewithlove #handmade
A delightful moment of calm #worldpeacegarden #hamsteadheath #meditativemoment #justbreathe #walkingadventures #calm
Has a nice ring to it #borisjohnson #toriesout #racistgovernment #lovehackney #busstop #guerillaart