Summer is drawing to a close and I’m not ready. I’ve become accustomed to the heat, the sort I remember from my childhood, and the luxury of scheduling barbecues safe in the knowledge that any rain forecast was unlikely or any showers brief. I think I went for at least a month without taking a jacket out with me, layering my arms with a tan instead. Glorious.

Loyal readers will know about all the gigging I’ve been doing this season. Many big names and incredible, unforgettable days and nights spent screaming myself hoarse and experiencing emotional purges. So many huge events compacted together though, was definitely wearing me out. A couple of big nights in among them had been postponed, with some sadness, but this helped spread the fun out just a little more.

One such gig was a long anticipated and huge moment, especially for inner teenage me. I’d enjoyed my Maynard, Patti and Nick moments already, but not Eddie. Eddie Vedder that is, lead singer of the epic group Pearl Jam, voice to a large portion of my late teenage soundtrack. This long lasting American band had been to London once (to my knowledge) in my time here but tickets were out of my budget. They had set two dates at the massive O2 and I wasn’t going to let them slip through my fingers again. 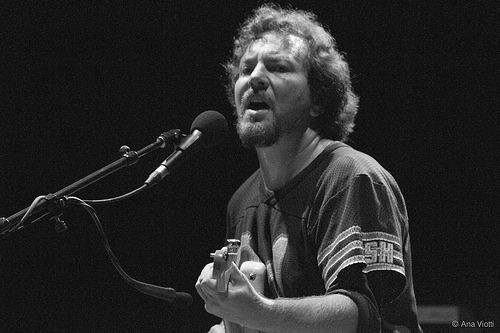 Booking tickets for their second night, after I had bought my ‘must have’ Meltdown Festival tickets, I realised that I would be seeing Pearl Jam and then The Deftones one day after the other. The excitement was one thing, but I also realised I would be a complete zombie that week, and hoped my enjoyment of said massive moments wouldn’t also be hampered by exhaustion and general over exposure to nineties greatness.

The afternoon of the Pearl Jam show an email was pinged around to say that Vedder had in fact blown his voice out on the first night and was unable to perform, allowing him time to rest before continuing on their European tour. I was gutted, but slightly relieved. Thankfully the rescheduled date was just a month later, and a day that both my friend joining me and I could make.

I arrived at North Greenwich station alongside thousands and we were all serenaded by a busker singing “Better Man” as we were on the escalator. I was nervous with excitement. A pre-show surprise was seeing the Trump Baby balloon bolted to the ground outside the venue. It had been floated at the rally the week before and I raced over to get a close up of it (and flip it a bird for good measure) 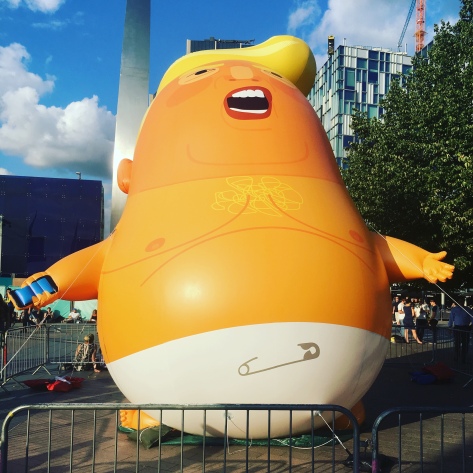 The biggest baby of them all

Meeting my friend we waited in a merchandise queue for ages, but time was against us and we decided to abandon it and find our seats instead. Ascending almost all the stairs, we were pretty high up, but right next to the side of the stage so still felt part of the action. By this point I was babbling to my friend with annoyingly impossible pace; my brain was struggling to compute that I would soon be seeing Eddie Vedder on stage, hopefully not worse for wear after their tour.

I had made an attempt to refresh my drink when the music finally started. I was in a queue when I could hear an intro, which I didn’t recognise. I abandoned my mission after about a minute and ran back to my seat in time to catch “Oceans”. We knew we were in for a wild ride when Vedder declared this night signaled the end of their tour so he didn’t have to save his voice for anyone, and then seeing the mosh pit we were overlooking respond accordingly. The over enthusiasm of the crowd meant some people in front on the floor had to be passed over the barriers to avoid getting crushed, but Vedder kept a close eye on the situation and reminded the crowd we were all one family and to look after each other. At another point he stopped mid song to ask those on the floor to each take three steps back on his count, which they did. It was quite a sight to behold, a wave of people not only following instructions in their excitable state, but the spectacle of the crowd all moving together was something to see.

The size of that pit!

Vedder was so energetic, he was infectious. Jumping around the stage like a teenager himself he seemed to express the joy of the crowd and the band themselves. Every single person in that venue was having a blast. Crashing through a blend of older and newer tracks, I screamed along to “Even Flow” and “Given to Fly” and felt old emotions rise to “Daughter” and “I Am Mine”. I must admit, chunks of this show are a bit of a blur. It wasn’t the alcohol, but I am honestly still pinching myself. It felt like a culmination of all the ‘can’t believe it’ moments I had in the couple of months preceding.

Pausing mid-way through their set, Vedder expressed a sincere apology for the postponement and thanked us all for coming back to see them. He also mentioned the anti-Trump rally that had just occurred and expressed the bands stance about spreading a message of love and not one of division and hatred. He then took a moment to read out some of his favourite signs seen pictured at the rally to much laughter and applause.

The band exited the stage as the first part of their set finished, but we all knew they were coming back for an encore and did not stop screaming until they did. Vedder returned and sat on a stool in the middle of the stage with an acoustic guitar. He started speaking of the musical legends we had lost in the last year and I started to tear up at that point, since one such legend was Chris Cornell. Cornell and Vedder had been friends, and in fact it was with Temple of the Dog, an early band featuring Cornell, that Vedder had first been recorded singing on their track “Hunger Strike”. I’ve heard this song a lot recently since Cornell’s suicide in May 2017 which shocked many; hitting me quite hard personally. I had entertained the possibility that Cornell would be mentioned or a song covered, but the idea just made me weep. In a good way, Vedder didn’t mention Cornell specifically, but covered Tom Petty’s “I Won’t Back Down” as a solo which felt an appropriate and moving tribute to both Petty and Cornell. 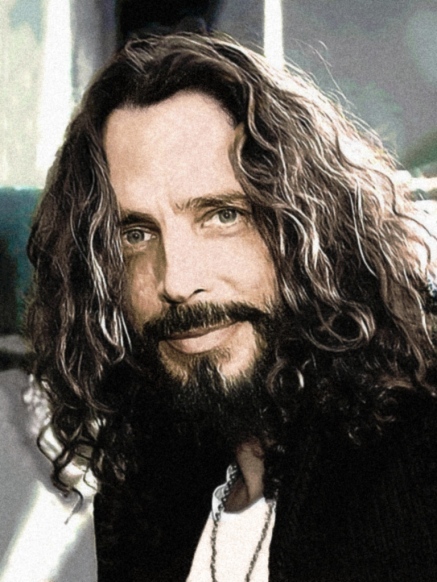 Gone but not forgotten, Chris Cornell

It was the first few bars of “Jeremy” that had the whole arena on their feet again. I could audibly hear the words being sung by the crowd, as if every single person present was singing along. During the blistering performance of “Mind Your Manners”, I couldn’t contemplate how this evening could possibly get any better. My friend and I kept looking at each other, wide eyed and elated mouthing ‘how good is this’ over and over.

Finishing the encore I thought it unlikely they would come out again, but the lights remained down as some people filtered out the venue. Seats were freeing up below us so we decided just to move a little closer to the action just in case. Encore number two did happen, starting with another classic: “Elderly Woman Behind the Counter in a Small Town”. It was when we recognised “Alive” though that I thought the roof was literally going to be blown off the giant dome. Figuring this had to be it since they had already exceeded their curfew, and the venue lights had gone up showing a quarter of the crowd had already left, I readied myself for a slow tube queue waiting for us at the station.

Then a riff started emanating from the stage that I knew, but couldn’t place, and then I couldn’t believe. They had started a cover of “Baba O’Riley” which is my absolute favourite song by The Who, and I basically lost my mind. I had been worried I’d have to try navigate the night buses home by this point, but I no longer cared. This was one of the greatest things I’ve heard/seen on stage. They continued on with “Yellow Ledbetter” before leaving the stage again. The crowd were still applauding, and we were convinced it was over.

I’d never experienced a third encore, but they were not done yet. Not only had Vedder’s voice held out, powering through nearly three hours of belters, but now they returned for  what would be their actual final song: Bob Dylan’s “All Along the Watchtower”. I was almost in tears again. Another firm favourite; it felt so personal, warm and wonderful. The whole gig had felt like a private tour after party in someone’s front room surrounded by close friends.

For a band that has been playing for decades, their unwavering enthusiasm for what they were doing was incredible, admirable and inspirational. Their appreciation and gratitude towards their fans was also humble, sincere and moving. The adult dream, for me at least, is to be doing what you love, and clearly they have achieved this and are spreading the resulting joy sprinkled with wonder wherever they play. There was certainly a spring in my tired steps as we exited, looking at strangers faces and recognising the same amazement in each other’s gazes. This event was truly something special, and the bits I do remember clearly are going to stick with me permanently.

One thought on “Ultimate Jam”