Before travelling last month I asked friends and colleagues for any recommendations when visiting Berlin. Museums, attractions and restaurants were added to my list of holiday possibilities, but one excellent suggestion I’d not considered was the Hop On Hop Off bus network. Ubiquitous in London, I think of these buses as a purely tourist notion which I didn’t think of, but it was my turn to play tourist, and it now seemed an obvious choice to be chauffeured between sites.

Taking my pre-purchased ticket to Potsdammer Platz I found myself loitering around a regular bus stop waiting for any one of a variety of multi-coloured buses to arrive from around a corner. I was relieved to board after only a short wait. While everyone knows the only valid seats are on the open top deck of these vehicles, I was glad to be able the vehicle still provided some respite from the large number of wasps which were flying about everywhere. Trying to delicately swat one away from my beer at a pub the day before, a joking comment from a septuagenarian patron that the wasps reminded us all that we were sitting in former East Berlin resulted in a few chuckles. Can’t say I’m a wasp fan in any capacity.

The first stop on my tour was the Topography of Terror which I had visited the day before. I’d hoped to have time later in the day to return and see the rest of it since the collection was so immense and detailed. I stayed on the bus until the next stop which was a must see: Checkpoint Charlie. While I found this site to be a bit tacky, complete with actors in uniforms and large American flags flying; the centre across the road detailing the history of the spot was fascinating. Profiling daring escapes and telling the stories of those who lost their lives trying to flee East Berlin over the wall. I found these accounts quite moving and again so strange that this all happened so recently.

Back on the bus, and following running into the ‘love parade’ the day before in Kreutzberg, it was surprising to see the bus take a minor diversion to accommodate another march in our path. I was delighted to identify that this time it was vegans making their way through town to advocate for cruelty free living. It was amazing that in a land known for wurst and being a heavily meat based culture there would be such a large group of concerned citizens taking a more holistic approach. (Take that stereotypes and assumptions) It made me think about the art tour I had been on the day before and reminded me to keep my eyes peeled for more street art sightings.

I got out of the bus again at Neptunbrunnen (Neptune’s Fountain), not only to take some photos, but also to take advantage of a second bus route journeying to different sites and thought I could cross over. Looking around the square however, I spotted another famous landmark recommended by a colleague: Fernsehturm (TV Tower). The tallest tower in Berlin, it was constructed in the late sixties by the GDR as a show of power. It is possible to ascend and view the entire city from a platform over 200 metres high. It was early enough in the day and it seemed rude not to, so I made my way over.

Buying a ticket I was told there was at least a 90 minute wait before I could go up; there were only two small lifts to service the tower, meaning tickets were timed. Since I had some time to kill, I bought myself a snack and people watched in the square at the base of the tower and then took a wander down to Alexanderplatz around the corner. It was there I found all the vegans again!

Turns out the annual Vegan Sommerfest was happening over the weekend and I walked into an impressive huddle of stalls selling vegan food, shoes, accessories and bath products. I was sorry I had just eaten as I would have loved to sample what was on offer. What was encouraging was how popular the market was. It was like walking down crowded Oxford Circus with hundreds of happy and enthusiastic supporters milling around with me; a fantastic surprise.

For the animals, the environment and for health’s sake

When my turn in one of the tiny lifts came along I was shocked stepping into the lift car to see a section of the ceiling had been replaced with glass, making the entire shaft visible during the superfast 40 second journey to the top. (I was relieved it was the ceiling that was see-through and not the floor!) Once at the top, the view from the platform was incredible! Information cards along the perimeter detailed the buildings and the landscape and while I wasn’t familiar with much of it, it was wonderful to get a literal bird’s eye view of the city.

A revolving restaurant is above the platform which rotates a full 360 degrees in about an hour. Next time I am in the city I will definitely try make a booking; that would be a spectacular dining experience. I wasn’t up the tower for very long; the space is relatively small and there were loads of people jostling for a view so not an atmosphere lending itself to any quiet contemplation. Considering I’d spent a few hours in the area already I thought it best to head back down after walking around the platform once. It was a pretty special sight to behold.

Neptune from the sky

Back on the bus I joined the second tour which criss-crossed between former East and West Berlin, following a section of the wall and noting famous spots where the photographs taken of a woman escaping by dangling out a first floor window and the officer who jumped over the barrier to defect when it was just a roll of barbed wire. A stop I had to get out for though, was the East Side Gallery. Again, it was a fleeting visit, the bus itself paused for about 20 minutes and I took the opportunity to walk a short length of the wall to absorb a slice of the gallery, and see the famous kiss which was easily located by the crowd on the pavement. 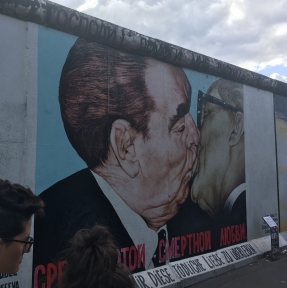 While I found it odd everyone wanted a selfie with the works of art, I remained content to have pictures of just the panels themselves. One surprise was seeing two of the panels painted with white squares where visitors had ‘tagged’ it with their own signatures and doodles. It was too tempting not to leave a scratch on a landmark in a city that had given me so many feelings in such a short space of time.

Returning to the bus and continuing with both routes I remained in the vehicle for both. Not only was time against me, but I was also starting to feel a bit worn out. I was very much enjoying getting a taste for the city and its sites, including the Reichstag, the glittering Victory Column, driving through the Tiergarten and the crumbling bell tower of the Kaiser Wilhelm Memorial Church.

The quite stunning Victory Column

During this same weekend there was also ‘German Federal Government Open Day’ where official buildings usually closed were open for public viewing and there were crowds, queues and a celebratory atmosphere wherever we went. It felt like the whole city was sharing my tourist sense of wonder and joy.

Finally reaching my hotel in the evening after completing both bus routes, I had walked half the distance of the day before but felt even more tired.

It was exhilarating to have packed snippets of so much history and drama into one day. The incredible change that this city has experienced through its evolution was quite astounding to me. Travelling freely across where the wall once stood as well seemed surreal. This was literally a city divided and now functioning as one fascinating melting pot. A true testament to the sentiment ‘together we stand’. I cannot wait to return.

2 thoughts on “On the Buses”