Poetry has long been a companion of mine. Reading and writing it with various degrees of enthusiasm and success has been a part of my life since I first fell in love with Roald Dahl’s Revolting Rhymes as a child. I had entered poems into competitions years ago, and while I never won anything, they were published in entry anthologies. I don’t think anyone read them though; and it was these kinds of insecurities and lack of known forum which lead to me focussing on other forms of expression instead for a while.

Crowdfunding a book of haikus and the advent of Button Poetry’s YouTube channel have tempted me back though. Receiving encouraging feedback about my own work from the Haiku book’s author and marvelling at the talents of the likes of Neil Hilborn, Rudy Francisco and Sabrina Benaim, I have been inspired to get back into poetry, albeit intimidated by the standard of their work.

I saw Hilborn on his first UK tour last year and it was quietly transformative. Not only did his honest, moving and raw work eke out my latent emotions, but I started to think that this form of spoken word expression was worth trying myself. I had no idea how to go about it and it remained an idea for the best part of a year. Within that time though, I managed to secure tickets to see John Cooper Clarke (total hero) and Hilborn announced another UK tour, this time sharing the bill with my other two favourites Francisco and Benaim. I couldn’t believe my luck. 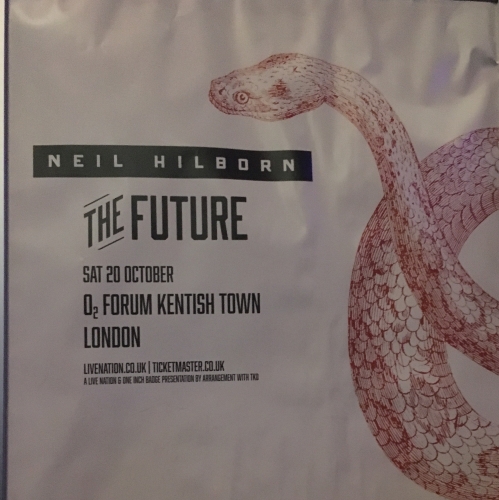 The anticipation for this show was different. I was excited to see Francisco and Benaim for the first time on this the opening night of their tour, but since I had also just started on my own performance journey it would be an experience from a fresh perspective. I felt I would not only be absorbing their words but also studying their performances as a whole, appreciating their emotional vulnerability as they expose their own soft centres for us to relate to.

The crowd cheered excitedly as Hilborn unexpectedly took to the stage first. Sadly, it was to announce that Francisco had been in a minor car accident on the way to the airport so had missed his plane and was still in America. I was quite disappointed I must admit, but knew that at least we were still in for a great show with longer sets from both Benaim and Hilborn.

The crowd’s excitement did not wane though, and it was to huge cheers and applause that Benaim took to the stage. This being her first international tour one could tell she was nervous, but who wouldn’t be standing in front of literally thousands baring your own perceived flaws. She also expressed her sadness at Francisco’s absence and we sent him a warm video via social media to show that we missed him which I thought was a sweet gesture. Benaim’s performance however was even more memorable.

Her set composed of works mostly from her book, Depression and Other Magic Tricks, she beautifully and honestly described her experiences crafting her words through the view from a mental health window that I related to, along with the difficulties and feelings of inadequacy this inspires. It was heart-warming to know I was among people who ‘got it’ and was in a safe space surrounded by sympathetic strangers. It was like we were all hearing her words, acknowledging the truth she was admitting and uplifting each other subconsciously, knowing we all had our own understanding of what she was saying. Her vulnerability was palpable as she debuted a new poem for us from memory that had us all entranced. Benaim’s delightful and sincere performance was over too quickly and then it was time for Hilborn.

He took to the stage to a level of applause that would humble a rock star. Since his poem OCD went viral years ago his star has shone brightly and his work has continued to inspire, console, motivate and entertain. Seeing him a year ago I was near the back of a crammed hall, this time I was in the front row, close enough to peer up his nostrils if I was so inclined. He began by saying how much he enjoyed his last tour and being in the UK in general. He described his discovery of Argos earlier in the day and that he’d already witnessed two fights that evening walking down Camden High Street. Through much knowing laughter from the audience I said out loud: “Welcome to Camden” which I realised we were close enough for him to hear. He repeated  the line to himself as he stepped away from the microphone and immediately responded with a: “Fuck you” through a sarcastic grin, making us all chuckle harder.

Reading from his latest book, The Future, Hilborn’s performance was also peppered with essential classics, like OCD and Joey as well as self-deprecating banter in between works. His rapid fire delivery was sustained throughout and his ever moving hands and arms seemed to give away his nervousness. I found this really endearing though; he has become the poster boy for spoken word these last few years, but he has remained humble and grounded. He seemed genuinely moved by the warm reception and crowd appreciation. He also told us that since there were too many of us for him to meet afterward, he had signed every copy of his books available to buy that night. I of course had to get my copy of The Future then and there.

Leaving the stage to a standing ovation I felt so lucky to have been there. Lucky to be exposed to such excellent work and feel inspired to dip my toes in the same pond and lucky to have excellent support along the way. When I excitedly opened my brand new book to inspect Hilborn’s signature I got a slight chill when I saw the inscription he wrote: “Stay lucky”. I’ll do my best.

So far so good

Not to be left out, Rudy Francisco’s book, Helium, is also available here