Anyone who knows me will tell you I’ve become a bit obsessed with poetry lately. Writing, performing, reading and gigging; it seems to be all I can talk about these days. Mentioning my historical love of the written word in a previous post, I have been feeling lucky to have seen spoken word star Neil Hilborn twice in the space of (loosely) a year.

Being inspired in this time to start performing my own works I am still coming to terms with getting tickets to see another original inspiration for my spoken word adventure; the pioneering people’s poet, Dr John Cooper Clarke. Having published his first book of new material in decades, Clarke had taken to the road and my fan brain could barely handle the volume of excitement.

A rockstar in his own right, it seemed a little strange to be seeing a punk performer at the famous Palladium theatre. Although, the last show I saw there was actually Gutterdammerung so you’d think I would start associating this grand venue with the ‘rockstar’ sort of crowd.

The Doctor is in

Clutching my brand new copy of The Luckiest Man Alive I took my seat and marvelled at the likelihood of seeing a man who has been such an inspiration in the short few years I’ve known about him. I first recall seeing him perform in the film Control (Anton Corbijn’s biopic about the tragically short life of Ian Curtis) as a warm up act for the band Joy Division (like he did in reality). His rapid pace of delivery and strong northern accent meant I struggled to pick up all he was saying, plus I was distracted by his outrageous image. The mad spiky hair and his skinny drainpipe-jeaned legs did not comply with my internal image of a poet; they were long dead, stuffy scholars or classic long haired hippies as far as I was concerned. Then there was the swearing; the poem he was performing in the film was “Evidently Chickentown” which is full of profanity, appropriate to his message, though not at all what I associated with poetry. It brought the medium of spoken word into a contemporary space for me and the more of his works I subsequently read, the more I felt inspired to one day perform my own pieces.

There was definitely a buzz in the air of the Palladium. The bill had a fantastic list of UK poets to support Dr Clarke and, while their slots where short, they all gave powerful and personal performances. First on the bill was Clare Ferguson-Walker followed by Tori Garbutt. They were in turn followed by Mike Garry and Luke Wright, who gave a passionate recitation of his work titled “IDS” all about Iain Duncan Smith. I mention this since the entire work only contained one syllable, the letter I, throughout and was so impressive. The last of the support acts was a real treat, ‘Premier Yorkshire Poet’ Geoffrey Allerton entertained us with hilariously bad ‘dad jokes’ and wonderful poems. Turned out Allerton is actually a character performed by comedian Simon Day and he had us all shrieking with laughter. Soon it was time for the main event. 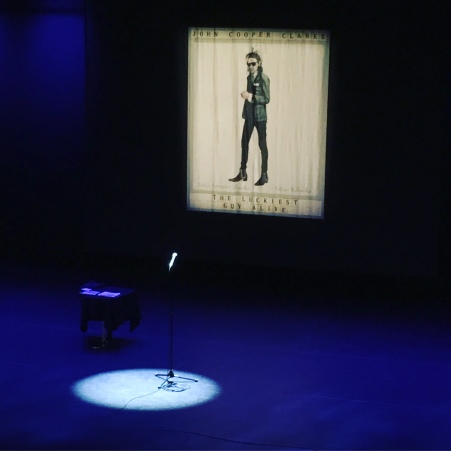 Marching out on the stage to loud cheers Dr Clarke seemed delighted to be there with us. Wearing his signature drainpipes, outrageous Chelsea boots and dark glasses he was every bit the artist I was expecting to see, even though his wild hair was tamed underneath a hat. His chats with the crowd were quite amusing; ranging from asking who had seen him before to advising against buying a monkey butler. This was part of the preamble for a new work entitled “Shave off” where he envisages having said monkey butler and playing out the potential hazard of it getting hold of his straight razor; utterly bizarre and fantastic.

He read quite a few works from his new book including a selection of haikus, an ode to hiring a car, and the self-explanatory “I’ve Fallen in Love with my Wife”. Notorious for his opioid addiction in the eighties, Dr Clarke mentioned how much weight he’d put on since giving up the habit, to much hilarity since he’s still stick thin. He then took us on a trip down memory lane by performing one of his most famous works “Beasley Street”. Rapturously received, he told us he had since written a follow up to this work, describing wretched conditions in Manchester, after a recent visit to the area. The ‘sequel’ poem has been titled “Beasley Boulevard” which gives you an idea of the direction the area has taken since he wrote the original.

I had to stand in ovation as he exited the stage since I felt this might be my one and only chance to see him live and needed to demonstrate what a profound effect he’s had on me and my creative pursuits. I’d barely sat down when he darted back out on stage again for an encore. Through a broad grin he told us he planned to milk the applause but there were stairs involved backstage so he came straight back out again instead.

The encore was everything I wanted in a neat package; performing the pieces I dared not hope to hear. He rattled through “Evidently Chickentown” at a blistering pace followed with a personal favourite “Twat” (complete with audience participation) and finally ending off with his work most special to me and the friend I was with “I Wanna be Yours”.

It was a surreal evening. Waiting in the loo queue I was chatting with a few other ladies and mentioned he had lived with Nico in the eighties. One of them nodded and the other blurted out; “Who’s Nico?” Feeling it necessary to explain she sang with the Velvet Undergound, was a model, actress and solo performer who hated being as beautiful as she was, but sadly was most famous for being a junkie. Thinking my work was done I was telling my friend the story as we left the building and we walked passed this woman again with her group as they stood around her. She had her phone in hand, and was reading internet facts about Nico and the Velvet Undergound to them all. We had to chuckle.

I hate to say it since it’s become so cliché but Dr Clarke is truly a national treasure. His work is so honest, accessible and descriptive. His words cling to you and his delivery is unique and lyrical. His style gave me permission to break the mould with my own writing and begin finding my voice. We should all be more honest with our words and Dr Clarke is leading the way.

His new book is excellent and I began devouring it on the way home from the theatre. I recommend it for yourself or the poetry fan you know.