Regular readers will notice I write a lot about going to gigs. Living in London provides ample opportunity to see acts live and I can never let a performance of a favourite band/artist or a newly discovered talent pass by, despite the groans from my credit card. Music has always meant a lot to me; growing up it was a conduit to my emotions and even now can be used as a comfort or to enhance joy as and when my mood fluctuates.

Music as a therapeutic tool and emotional armour

Working in an open plan office is great for banter but can also produce a distracting amount of noise so I am more often than not sitting at my desk with headphones on listening to whatever is best to motivate me at that time. Old school dance, weird alternative, nineties metal mixed with a lot of punk and psycho-billy; my tastes bounce all over the place. I have however found myself drifting in a different direction on a few occasions.

Having depression for much of my life has meant an emotional weight can occasionally consume me; the kind of weight that makes even breathing like a chore. Simple routine tasks like getting out of bed, leaving the flat and functioning at work can feel insurmountable in these circumstances. Finding a musical accompaniment to suit this fragile state can also be tricky, striking the right balance of comfort and motivation can feel as impossible as telling people I’m just fine. The last time this happened I struggled to create that safe cocoon for myself, until I started listening to classical music. 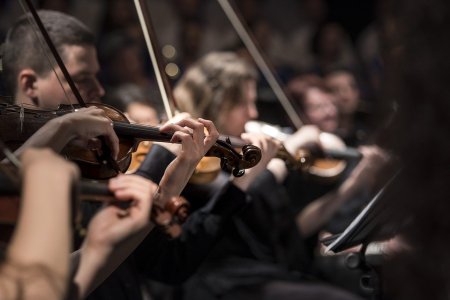 I was an enthusiastic ballerina for about a year when I was little; spurred on by a VHS tape I just about wore out of a performance of Ludwig Minkus’s Don Quixote featuring Mikhail Baryshnikov from 1983 which was recorded from TV. I found a video of that exact same performance on You Tube recently and watched it one vulnerable and mentally trying evening when I could feel the sadness building. I felt familiar with the music and it stirred up some hopeful memories which were of comfort. 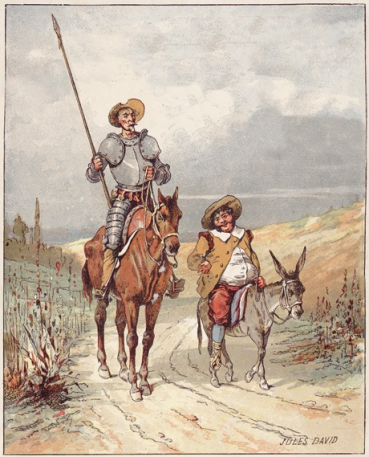 The Ingenious Gentleman Don Quixote of La Mancha and his companion Sancho Panza. Novel by Miguel de Cervantes, depicted above by Jules David

I began listening to the soundtrack while out and at work and found it so soothing. Eager to try expand my classical repertoire I gave Pyotr Ilyich Tchaikovsky’s Swan Lake a try. This too was familiar and wonderfully calming. (Russian composers for the win) Months on and I still dip into these classics, and more, regardless of my mood. I’d not considered live classical music however.

Tchaikovsky: From Russia with feeling

It was when I was feeling better that I took the opportunity to attend a screening of Fritz Lang’s masterpiece “Metropolis” with live accompaniment. While my main motive was to see the film in its restored glory, the surviving footage that is, I was moved by the Philharmonia, the Southbank Centre’s resident orchestra.  The film’s melodrama reached new peaks, the tragedy deeper lows and the ultimate triumph was all the more accessible with a live orchestra. It’s cliché to say, but it’s the truth that the film was brought to life by it.

I was reminded of a special night in Cape Town that had fallen between the cracks of memory; a friend and I were lucky enough to see David Helfgott on tour at the Baxter Theatre. It was an intimate performance by a musical genius who maintained his incredible piano playing abilities despite suffering major mental health difficulties. Helfgott was made famous by Geoffrey Rush’s Oscar winning portrayal of him in the 1997 movie “Shine”, and his 2015 European tour was also the subject of the documentary: “Hello, I’m David”.

I remembered his blisteringly fast rendition of some very well-known tunes among ones I’d never heard before, but still managed to pluck my emotional strings. Despite Helfgott’s difficulty with communicating in a way everyone could fully understand, his prodigious talent prevailed and created a bridge between his reality and the outside world with music. It was a powerful sight and I do recall a touch of sadness at his clearly unique state, but he seemed perfectly happy, and he continues to play and fulfil at least some of his potential all over the world which is wonderful.

Back to London and a few weeks ago when I was debating whether or not it was time to bring out the winter coat or rely on a few autumnal layers before venturing back out to see the Philharmonia on a Sunday afternoon. Feeling very grown up to attend a classical music matinee, the current rock star of the classical world was conducting. Santtu-Matias Rouvali is the youngest principle conductor of the Philharmonia, as I heard another attendee read aloud from the programme to his concert partner. The afternoon’s programme of all Russian composers began with Igor Stravinsky’s “Fireworks”, then a rousing rendition of Sergei Rachmaninoff’s Piano Concerto No. 1. The time flew and the resounding applause was extended. The second half was what I was really there for, excerpts of “Swan Lake”.

Knowing Tchaikovsky’s work much better than just the famous melodies I couldn’t help singing along (in my head). I am occasionally physically moved to tears by the focused energy at band gigs I go to, but had not expected the same reaction to a ballet backing track. Seeing it performed live made it feel real, like Metropolis; the drama of the story was present even without dancers. It was like discovering a rare species of animal in its natural habitat instead of caged in a zoo. There was a freedom to the notes being released into the Royal Festival Hall, reverberating through the enthralled crowd. It appeared I was not the only one as the performance closed to standing ovations and multiple returns to the stage for Rouvali and principle pianist Nikolai Lugansky, as if the emphatic audience were reluctant to accept the show was over.

A still from Swan Lake performed by the Cincinnati Ballet

This has firmly cemented classical music’s role in my mind, and heart. Being placated by a series of very old notes as well as being able to access, and perhaps even process, that vulnerability when feeling stronger is unique to classical music. I wondered if this meant I was a ‘proper adult’ now, or if I was getting ‘old’? Adult – for sure, but ‘old’ – never.

I read in a book about writing poetry my brother-in-law got me as a gift many years ago by the accomplished Stephen Fry that one must learn the rules before one breaks them. Shakespeare is perennially popular for a reason and the same applies to music. These classics are named as such since they are a part of our human story, part of our creative evolution. Instruments, styles and performances have of course all changed but the emotional expression remains; tangible and ready to transcend language, perspective, and judgement and connect us all. I’m looking forward to continuing my journey of discovery, not only to increase the self-care repertoire, but to simply relax and enjoy.

I was on my way out of town when I glanced behind me and was reminded of just where I was. A sudden mix of gratitude and sense of accomplishment followed; returning a kind of smile I’ve been missing for a long while. #simplethings #gratitude #patience #nevergiveup #bepresent
When you realise the baby jumpers you’ve made are inadvertently giving Pride vibes 😍 #pride #translivesmatter #lgbtqally #transpride #rainbowflag #homemade #charityknitting #knittersofinstagram
Always remember to wear your mask… #guerillacrochet #postbox #seeninlondon #southwestlondon
Summer cygnets #summerinlondon #naturereserve #wetlands
I visited the green man,
I’m being watched… #knitsquad #homemade #madewithlove #knittedfriends #funwithtoys #homemadegifts
Feels like Christmas in July #tinselyarn #newprojectcomingsoon #sparkly #shiny #madewithlove #handmade
A delightful moment of calm #worldpeacegarden #hamsteadheath #meditativemoment #justbreathe #walkingadventures #calm
Has a nice ring to it #borisjohnson #toriesout #racistgovernment #lovehackney #busstop #guerillaart