‘Sweet little sleep, my dreams are yours to keep’

A chorus line from a tune titled ‘Late Victorian Holocaust’ repeated on Saturday night that is still circling my head. The evening was so incredible I struggle to believe it was not in fact a dream.

As the lights dimmed in the sold out Southbank Centre, the band took to the stage to excited, and almost nervous applause. A small specimen followed, wobbling slowly onto stage, stance secured by a cane following a fall that broke her left hip earlier this year. My heart sank slightly thinking we’d forced an icon away from her well-deserved comforts to perform for us. Reaching the front of the stage to enthusiastic cheers, Marianne Faithfull raised both arms (cane included) in what felt like a triumphant gesture. It felt as if she wished to embrace all of us applauding her. 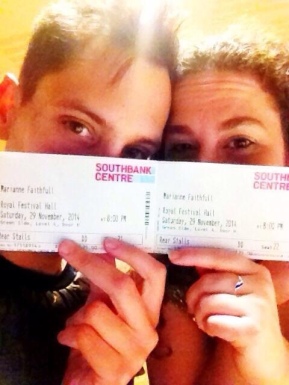 While her body appears frail, her presence is certainly mighty. Her sense of humour is very much intact, casually conversing with the audience. Giving us a brief history for the songs she had chosen to add to this tour, which celebrates a new album and 50 years of performing, beginning with singing in coffeehouses in London. It is almost hard to imagine this small woman commanding the total attention and adoration of an entire theatre has endured addiction, homelessness and an eating disorder to come back with such strength. She is a lady I would love to invite round for dinner just to watch words fall out of her mouth.

Her gravelled tones have not lost their power, nor any of its might. Her mesmerising voice ripped through her opening number ‘Give My Regards to London’. Her banter in between songs was self-effacing and honest. Her attitude could be described by some as brazen, but it is by no means arrogant. She spoke of going to see a doctor to confirm whether or not, following her injury, she could embark on this tour. The advice she was given was to go – the doctor surmising the music and love of her audience would help heal her. She said she could now agree with him, which lead to her thanking us for making her feel better. 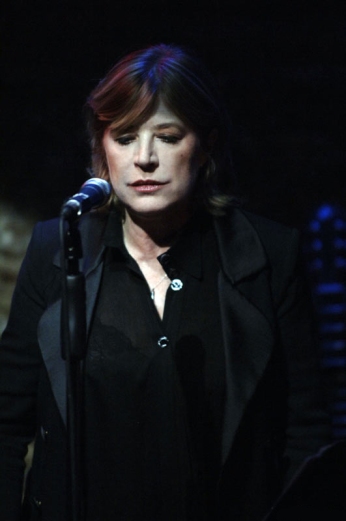 Promising us rarities in amongst new songs we were treated to ‘As tears go by’, ‘Sister Morphine’, Sparrows will sing’ and ‘Broken English’. Her backing band expertly providing accompaniment on a stage that was almost bare. No special effects, no visual tricks, just a communion of energy between Faithfull, her band and her adoring fans.

With the show continuing longer than initially scheduled I was slightly concerned the song that introduced me to Faithfull as a teenager, ‘Ballad of Lucy Jordan’, would not feature. She introduced this number, her penultimate, as a song ‘she quite liked, and perhaps a few others did too’. Hearing her voice sing the sad story brought quite a few tears to my eyes.

Our applause and lengthy standing ovation encouraged her to return for an encore – not without asking us first if we were sure. Victoriously enjoying her final round of applause and ovation she raised her arms out to us yet again. All we wanted to give her was that healing love, and something tells me she really felt it.