The ukulele is generally not taken that seriously. Seen by many as a toy or a joke version of a ‘real’ guitar, its pleasing notes are perceived as more of a novelty than a serious instrument in its own right. I don’t think I’ve heard anyone say that it’s their dream to learn to play one, or in fact that they do.
Out of the blue last week, a friend suggested our group join a Ukulele Hootenanny. Reception to the idea was lukewarm but a couple of us were curious enough and we made our way down to the Queen of Hoxton to see what this was all about. 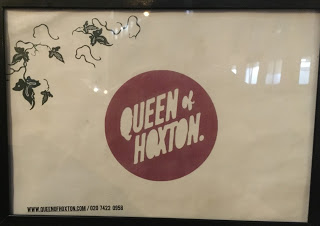 The bar holds weekly hootenannies – defined as an ‘informal gathering with folk music’ – where ukulele players of all skill levels congregate for a ‘strum along’. We were under the impression that this was going to be a lesson, but in fact it was basically a casual jam session.
Nestling onto a bench we chatted about our expectations, previous musical experience and, most importantly, the best colour for a bass guitar (Red being a strong favourite). I was most keen to learn a new instrument so that if anybody asked what I could play, I wouldn’t have to answer with “the recorder” anymore.
Being total novices, a couple of us didn’t have a uke of our own, but they were available for hire behind the bar. Very handy. We excitedly started strumming strings without fingering any notes properly and just making a bit of a noise in our corner. Noticing we were rather out of tune a kind veteran of the hootenanny, he told us he’d been attending for many years, graciously tuned them for us. Probably for his own sanity more than our benefit since he was positioned right next to us.
Lead by a couple of professional sounding players, we were all given copies of epic songbooks, elegantly stashed in a giant plastic bin. The comprehensive books were quite the tome of about 200 songs of varying styles and decades. It was like a dream karaoke playlist.
Diving straight in, page numbers were seemingly randomly called out and we collectively got stuck in and played (according to the instructions laid out on each page). Understanding there would be no tutorial at all we just started strumming away – with a mild sense of panic.
I was very soon aware that strumming (up AND down) and trying to change notes while singing along simultaneously was not going to happen for me first try.  Taking a strategic approach, I decided to break the tasks down into individual chunks. I focused on getting my strumming technique down and picking one note to play for each tune – hopefully the most prevalent one. (I can unequivocally say I’ve mastered C)
What an exhilarating evening. We played a variety of songs from Creedence Clearwater Revival to the Zutones and even Britney Spears. Everything just sounds amazing in ukulele. I broke a nail and have a blister on my thumb as a result, but feel proud.
It seems these plucky little instruments are experiencing a bit of a revival. I’ve even ordered one of my own now so I can practice and hopefully not just pretend to know what I’m doing…

One thought on “Plucky Little Beast”