Hearing my alarm shock me awake yesterday morning was more difficult than usual for a Monday; hardly a highlight in my weekly calendar, since I was still reeling from the day before. 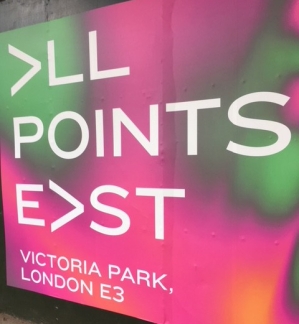 Shortly after seeing Nick Cave and the Bad Seeds last year and thinking I’d reached peak gig experience, I saw they were billed to appear in London again – and had to grab a ticket. Balking at the cost I saw they were headlining as part of All Points East, a new festival held in Victoria Park and stretched over a couple of weekends. Looking at the smaller print I saw another iconic name included in the list of performers – Patti Smith. If Cave is the father of my emotional expression, then she is the mother. 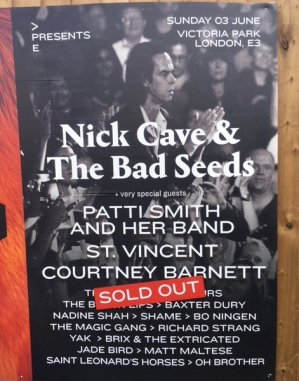 Months later, and following a last minute undelivered ticket panic, I braved the pollen laden air to meet mates in the vibrant summer sun. Having arrived earlier, my friends had lukewarm reviews about the bands they had already seen, but I’d arrived in time for the first group on my day’s agenda – the Black Lips. Not being very familiar with their nearly 20 year catalogue, I’d given them a quick listen the week before and quite enjoyed the Atlanta punk outfits ‘yee-haw’ thigh slapping flavour. They did not disappoint and included an unusual touch of crew intermittently throwing whole toilet rolls from the stage into the crowd, which were in turn tossed about. Odd choice, but also hilariously inspired. I kept feeling a bit confused as to the point, but then wondered why I hadn’t seen something like this before. 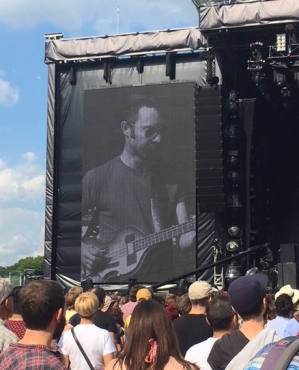 The next act on the same stage was Courtney Barnett. I fell in love with the young Australian’s singer/ songwriter skills when she was the soundtrack for much of my recent spring clean and ceiling painting. I wondered if her more acoustic sound would translate across such a large open space, but she was phenomenal. So much so I abandoned my plan to catch the second half of the eighties legends The Psychedelic Furs set occurring simultaneously on another stage. I’m very happy I stayed since she ended her set with one of my favourite songs: ‘Pedestrian at Best’. (I highly recommend giving her a listen) 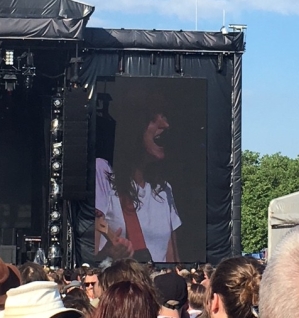 After a strategic comfort and bar break we moved closer to the stage as the sun started to dip in the sky. I took a photo of the empty stage to send to my family, since I was fidgety with anticipation, and as I looked down to put my phone away the crescendo of cheers started from the other side of the field. There she was, Patti Smith. I felt elated and overwhelmed. She approached the microphone with a binder and placing spectacles on her face. I wondered if the show would be poem or song orientated, and this seemed to answer my question. She announced that we were actually gathered on Allen Ginsberg’s birthday and proceeded to read his Footnote to Howl with such passion I started to tremble. As she read the final line: “Holy the supernatural extra brilliant intelligent kindness of the soul! “ I realised I was crying.

Thundering straight into ‘The People Have the Power’ my tears continued to flow, considering what dangerous, regressive and terrible times seem to be lurking on the horizon, yet also celebrating love, the power of said love and the connection developing between the thousands of us dancing and singing together with hope. Her rallying cry for change continued with ‘Summer Cannibals’, ‘Citizen Ship’ and a cover of John Lennon’s ‘Mind Games’. She seemingly addressed all the major ills of our society without actually preaching. 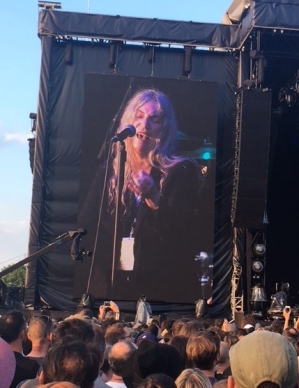 Picking up her acoustic guitar mid-set she began telling us about Richard Sohl – keyboardist of the Patti Smith band who had passed away, also on the same day, in 1990. Beginning to play ‘Beneath the Southern Cross’, an already deeply emotional song for me which I never expected to hear live, I felt like I was going into shock. I started shaking all over and was overcome, sobbing uncontrollably for much of it. I sang along without realising I knew the words as my friends held onto me. I expected I would be weeping during Nick Cave’s set (again) and definitely did not think I would lose control like that in a field of strangers. It wasn’t awkward though, and writing about it now I’m even welling up slightly. Such a powerful moment for many I think.

Increasing the energy she then launched a surprising and blistering cover of Midnight Oil’s ‘Beds are Burning’ followed by ‘Pissing in a River’, which had us all yelling. As the cheers slightly simmered, she stared at us all intently and began the opening line of ‘Horses’, but barely said two words before you could hardly hear her over the excited roar of the crowd. An updated version of this iconic song was mashed up with the classic ‘Gloria’ and I don’t know when last I jumped and screamed so much. It was joyful, urgent and celebratory, but a cautionary reminder of our responsibility to combat what appeared to be the world descending into a hellish pit of division around us with love.

Patti’s energy was so warm, open and giving; it was a combination of mother, aunt, sister, teacher, leader and best friend merged into something beautiful which exuded strength. She told us she loved doing gigs in the daylight, because she could see us all. Those words made the whole performance feel like a love letter to us as her fans and charging us to take positivity out to the world at large and spread it. Joyous, raucous and fully charged, I have never seen anything like it and doubt I ever will again. As soon as she left the stage my friends and I all gawped at each other and then wondered how we would survive Nick Cave after that emotional tidal wave.

Making another strategic facilities and drinks dash we got stuck in the rest of the festival crowd who had the same idea. The other stages were now closed as the headliners were due and the entire festival mob descended upon us like the dusk. While waiting for the final pint at the bar, the first haunting and piercing bars of ‘Jesus Alone’ emanated from the stage across the sea of people. Singing along to a line in the chorus: ‘With my voice I am calling you’, it was as if Nick Cave was sending out a call to prayer for all of us Bad Seeds to join and celebrate together. Feeling like I had spent my all emotional tokens I was excited yet not overwhelmed as he and the real Bad Seeds continued into ‘Magneto’ and the almost menacing ‘Do you Love Me’. Increasing the dramatic performance they crashed through 90’s hits ‘From Her to Eternity’, ‘Loverman’ and ‘Red Right Hand’ before Cave mellowed the vibe with his ‘wife’s favourite’ ‘Come Into My Sleep’. 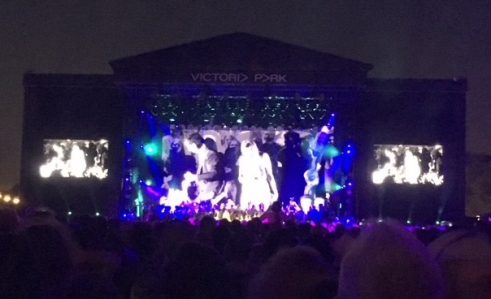 The Bad Seeds from a distance

Allowing us to catch our breath he mesmerised us with ‘Into My Arms’, which I noticed left a man stood very still next to me with visible tears rolling down his cheeks. Still feeling strong I thought I might make it through the show without balling. I was wrong. An incredibly personal rendition of ‘Girl in Amber’ followed and a slight change in lyric suddenly caught my breath and I knew I was gone. One of my friends had also been broken and we stood holding onto each other waiting for the emotion to wash over us.

It was surprise that snapped us back when Cave casually introduced Kylie Minogue to the stage. I couldn’t see her being in the middle of the heaving mass of bodies, but everyone around us was expletively exclaiming their amazement. I suddenly realised I was doing the same, and as they beautifully sang their duet ‘Where the Wild Roses Grow’ I found myself failing to cope with how much I was feeling.

Escalating the mood further, gig staple ‘Jubilee Street’ gave me opportunity to work off some of the extra energy – handing my half-finished pint to my friend I jumped around a lot which brought me back into the space a bit. ‘Deanna’, ‘Stagger Lee’ and ‘Push the Sky Away’ finished the set and also closed the festival. Of course, the small army of fans he pulls onto stage with him got to enjoy the final two songs with a band’s eye view of the sold out crowd. Some other friends of mine were lucky enough to be close to the stage and managed to join them! 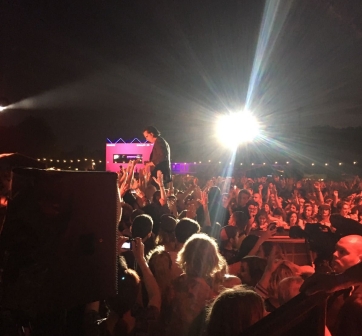 Filing slowly out of the park and then double backing to find the right exit it didn’t feel like my feet were touching the ground. There was a part of my sensible brain telling me about getting up for work the next day, but my main concern was getting back down to earth in time for it. It was as if all of my senses and emotions had been engaged simultaneously, but wonderfully and I could taste the air with my fingertips and see the love emanating from people’s souls. It was an incredibly intense experience to see many excellent acts that day, but to have two giants of poetry and musical expression I had idolised growing up not only live, but one after the other is still a bit more than I can compute. They could have both gone up and just clipped their toe nails and I would be a grateful witness, but there was something incredibly hopeful about seeing them in a field as one among 40,000.

Charged, invigorated, spent and inspired; it has been difficult to adjust back into real life. If this is the way my summer gig calendar is kicking off though, I feel adequately prepared for all the anticipation and excitement coming my way.

5 thoughts on “Patti for President”