London is absolutely melting right now. Not that summer hasn’t happened here before, but it is usually a week of higher temperatures followed by some traditional cloud, a little breeze and some relieving rain. I never thought I’d develop a thirst for precipitation on ‘Mud Island’, but following months of sustained heat the ground is beginning to resemble the drought stricken lawns and parks of Cape Town; soft grass reduced to brown hay and sand replacing soil, all observed through a lens of obvious discomfort worn by red-faced commuters.

A month ago the heatwave was already becoming something of a chore. I was delighted my washing was drying within a day, but I couldn’t sleep at night for the oppressive temperature, barely alleviated by opening a window, topped off by the most intense hay fever I have ever suffered. In an effort to escape the inevitable sneezing and sweatiness I took myself to the Barbican cinema for a limited screening. (Air conditioning and cheeky afternoon pint for the win).

For a couple of days only, Sara Driver’s documentary film Boom for Real, the Late Teenage Years of Jean-Michel Basquiat was being shown. I had been so moved by the retrospective of his work also hosted by the Barbican last year, reliving that emotion was irresistible. I also had to check that the pop up Banksy tributes to the New York artist were still visible on the walls of nearby Golden Lane. Protected by Perspex but sadly not vandalism free, it was lovely to revisit the works and recall the awe and excitement they inspired in me the first time. 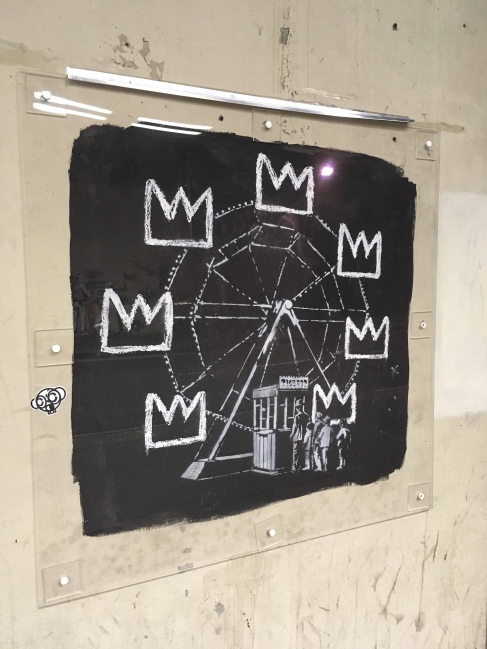 Nestled into the cool theatre, I was surprised to well up during the pre feature trailer for McQueen; I realised I was ready to experience Basquiat on an emotional level again but at least it would be anticipated this time, unlike the exhibition where the feelings pounced on me suddenly.

This was genuinely one of the most affectionate and honest documentaries I’ve ever seen. An account of a magnetic young mind as told through anecdotes and memories of friends and collaborators of the teenage Basquiat as he carved his way into the New York art scene of the late seventies. Driver elegantly paints a portrait of the city itself; a violent backdrop of disrepair and dissolution, and inserts a young runaway artist drifting between sleeping on the street and friend’s houses, touching lives with his charisma and creativity as he went.

This young man who seemed to ooze talent out of his pores, who would begin tagging the city as SAMO along with Al Diaz, followed by morphing this unbridled creative energy from words into clothes, postcards, painting, music, performance, sculpture and film making. Captured in interviews, footage and photos, Driver recreates the era, one in which she was also immersed; a time where drugs were freely available, AIDS had not entered into the consciousness and freedom was captured in self expression. This was where success wasn’t measured by money, but by simply communicating one’s message. In all this, Basquiat himself knew that he would be famous.

As his story was told by those who interacted with him I felt the emotion begin to swell. First in a sense of admiration, and then turning inward, making me internally ask the question ‘what am I doing’? The incredible fire that burned in Basquiat refused to be extinguished; he burned so bright he left scorch marks on the streets of New York and within art consciousness across mediums.

Before his meteoric rise to fame, through identifying himself as SAMO and his friendship with Andy Warhol, he was just a driven kid on his own urgent mission. The sense of loss at his early death was made even more profound for me when I considering the volume of work he had achieved in only a few years, and it was that moment my tears really began to flow.

Exhibition poster from the Barbican retrospective

Watching such a hopeful and inspiring film about a young person with so much to give made all my excuses for not finishing or even starting projects really seem feeble. I was grateful to have been exposed to his work, appreciate the continuing relevance of his message and challenging myself to do more of what makes my inner spark glow.

I haven’t been able to find any upcoming London screenings of Boom for Real, but I would recommend it for anyone who would like to see a beautiful portrayal about the evolution of an art genius who left us way too soon.