Anger is a poison; a toxin of nuclear potential that can quietly fester and slowly destroy the holder or explode with volatility and take aim at those in their vicinity. It is part of the human condition, a force that can drive and motivate us, but could equally be our undoing.

Growing up, my own experience with anger was inconsistent. My low self-esteem meant I didn’t give my feelings much value so I learned to swallow them up instead of expressing them. This lead to a build-up which would explode out of me inappropriately and, embarrassed by outbursts, I learned to even turn these inward. (I had a really ‘fun’ adolescence)

Now as a grown up, I’ve acknowledged this and know my feelings are indeed valid. The pent up anger stays at bay but can still emerge misplaced, but I have learned if something infuriates me, to deal with it promptly (mostly). Recently my anger has been focused towards social ills and injustices which has lead to a desire to actively do something about it to dissipate the anger before it builds up. I started getting involved in causes that meant something to me, actually joining marches and protests instead of only talking about them and fully engaging my inner activist to feel like I was making some sort of difference, even if it was just by showing up.

Getting a real taste for action last year, I was swept up in a wave of national pride as then president Zuma came under fire with mass demonstrations occurring across South Africa. A couple of hundred of expats congregated outside South Africa House on Trafalgar Square in solidarity with our discontented kith and kin to make sure the government knew Zuma’s failings were being noticed internationally. I wasn’t sure what real difference we would make, but a year later Zuma ‘fell’ and hope in our homeland’s democracy began to be restored.

Campaigning for change in South Africa

The friend who joined me on that protest reflected that he felt we did indeed play a part; our participation increased the numbers and created further interest, consequently multiplying the pressure until the situation was no longer sustainable. This made me realise how important simply turning up can be, and as a result I’ve been on the Women’s March to stand up for equality, participated in Processions to honour the sacrifices of the Suffragettes as well as marching with the Punx in London Pride. 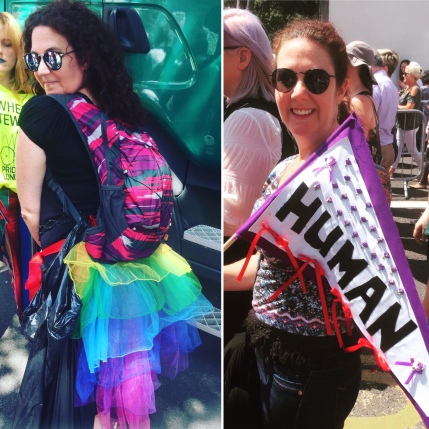 The activism bug has bitten

It was a different set of emotions that took me back to Trafalgar Square a few of weeks ago to what may have been one of the biggest mass demonstrations in London’s history. Nearly a quarter of a million people took to the streets to express their downright rage at the UK playing host to Supreme Orange himself, US President Donald Trump.

President Trump’s fleeting visit was met with utter disgust by the majority, intensified by annoyance at his noisy circling military helicopters which made it sound like World War Three had started. He and his wife spent their first night at the American Consulate in Regents Park which is very near my office. Knowing I was within walking distance of this maniac actually made me feel a little sick. A dangerous man in a position of power, who befriends nationalists, refuses to condemn (and encourages) racism, shows no empathy and conducts himself with an arrogance that is at such a level it needs a new adjective to describe it. His flippant comments about grabbing women are utterly disgraceful, let alone his sexist views on abortion and women’s health autonomy as well as his mocking of the disabled and disregard for the LGBT+ community, which I find shocking. All of these reasons and more are why a group of mates and I joined the congregation in the Square. 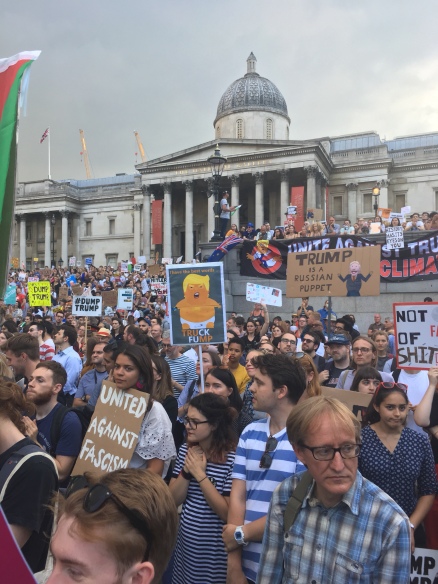 So many people (Photo credit AvC)

One of my mates described Trump as the poster child for entitlement and straight white man privilege, complete with a perceived attitude assuming that more rights for others means less for those that have always enjoyed having the most. She aptly described it by quoting a slogan she’d read: “It’s not pie”.

Crafting out my anger

A difficult week at work and sweltering temperatures further fuelled my rage as I waded through the mass gathered in the closed streets around the Square. I saw some amazing posters; some incredibly funny and well thought out efforts and results of a lot of work. All this for a man who had been encapsulated in a now legendary crowd funded orange baby balloon which was bouncing around the base of Nelson’s Column. Eventually finding each other, our squad tried to make our way to face the stage since we couldn’t hear the speakers from the side.

We made it to the centre of the Square just in time to hear one of the instigators of this mass action, Owen Jones, speak and reiterate the themes which ran through the speeches of numerous representatives who had their five minutes at the microphone of inclusion, justice, resistance, intersectionality and openness. Subjects I can only endorse. The revulsion for Trump was only surpassed by the vitriol aimed at the Prime Minister Theresa May for hosting him and for bungling the Brexit process – which I doubt anyone present was a fan of.

…and this guy (Photo credit: AvC)

Ironically, the abhorration toward Trump was what brought us all together that day; acting as a galvanising force for the left leaning and forming a demonstration against ‘Trumpism’ in the States, but also to stop it developing in the UK. Brexit has given local nationalists and racists a self-appointed mandate to ‘take the country back’ and is being used as an excuse to intimidate and attack anyone who they deem ‘not British enough’.

I find it ridiculous that we are still having this conversation in 2018. I am incredibly angry that any progress made in the last few decades towards a tolerant and inclusive society seems to be under threat by fearful small minded people who cannot consider that life is experienced differently by others. If one can’t see a problem one wouldn’t see the need to change things and stepping back into the dark ages of ignorance is not acceptable. I am so proud to have put feet on the ground not just for myself, but for other friends around the world who would have stood next to me if they able.

My anger hasn’t exactly subsided, and probably won’t until Trump is out of office, but I do feel better for standing up for what matters to me. Joining hundreds of thousands of like-minded others who also felt strongly enough to participate and represent the hundreds of thousands more who couldn’t make it was definitely a hopeful moment. He may have succeeded in making a fool of himself and his country, but one more thing President Trump has managed to achieve is to show us exactly how ‘real’ it gets when we are complacent and take things for granted. Words matter, deeds matter and most importantly, votes matter.