I love travelling; perhaps a silly thing to say for someone who chose to relocate to the opposite side of the world from where they grew up. One of the major attractions for this move was being on the doorstep of Europe, and while it took me ages to start hopping over the pond, my list of seen places has finally started growing.

It was this delight that helped me rise at 4am one day last month, to get a 5am taxi, to catch an 8am flight to meet friends in Prague. It was all going so smoothly until I made an error in picking the Stansted Wetherspoons for a quick pre-flight breakfast. While the coffee was as average as expected, having to wait over half an hour for some simple scrambled eggs did nothing to assuage my inevitable travel anxiety. In fact, I was left infuriated when my gate was announced and I had to ask for a refund for my invisible meal, and still being charged for half of it. Poor show, and sadly it meant I was pretty grumpy by the time I boarded my plane.

My grumpiness increased when I realised my headphones wouldn’t work in the air while not connected to my phone by cable, which I didn’t have, meaning the podcasts and playlists I was looking forward to enjoying inflight were also out of the question. (Thank goodness for Kindle) It almost didn’t surprise me when the automatic gates kept thinking and thinking and thinking about whether or not to let me into the Czech Republic when I landed. I tried not to look too hagged and peeved when waved over to an officials window, but thankfully he let me through very quickly. My delight returned in full force as I entered the terminal to find my bestie and his boyfriend waiting for me, with a handwritten sign bearing my full name and their wide grins matching mine. It couldn’t have been a happier reunion.

By this point I felt I could relate to a famished Oliver Twist wanting more having only digested a cup of coffee so far and was very happy my guides had purchased me a travel ticket as we bussed and Metro’d it into the centre of Prague. In Amsterdam my Afrikaans knowledge meant I could decipher some of the Dutch signage, and about 5% of the German signs in Berlin, but Czech proved completely alien to me. I literally could not even attempt to pronounce any of the stops we passed on our route; I resorted to taking pictures in case I was to travel back to the airport alone at the end of the trip.

I still need help pronouncing this

Reaching the centre and dropping my bag off in a locker at a large train station, the wonder began to flow in waves as we caught a tram and I glanced out the window seeing a brand new city in the bright sunlight. When asked what I wanted to see I realised I had done no research prior to this trip, my only Czech bucket list place being Sedlec Ossuary which is over an hour away from Prague, so that wasn’t going to make it onto the days agenda. I had been more focussed on spending time with my friends and was very enthusiastic at the suggestion of first visiting my bestie’s favourite coffee shop in town.

This may have been fuelled more by the prospect of solid food, even if it was cake, than much else; so my face sank along with my heart when we thought it was closed upon arrival. Thinking this may have been my bad luck continuing to try and influence the day, my sulking was soon replaced with cheering when we realised we were in front of the wrong door and it was indeed open. This mistake was easily made since one had to walk passed a tobacconist counter, round a corner, through a room with tables and then out to the back of the building, invisible from the street where our treats awaited us. Sitting outside, basking in the midday sun, enjoying coffees and delicious honey cake I definitely began to feel restored and ready for the afternoon’s adventure.

Drawn to the abundant cherry blossom trees blessing their surrounding with petals fluttering about in the breeze, we braved the incline of Petrin Hill within Petrin Park absorbing stunning panoramic views of the town. A bit of a hike to the top, the castle like structures made me feel like I had landed in a fairy tale. One such building, although castle-like, looked like a modern structure painted in a soft yet bright yellow, housed a mirror maze. My inner tourist then became my outer excitable tourist and we decided to give it a try.

A view halfway up the hill like a 5000 piece puzzle

The maze itself was quite amusing, a little confusing, but the novelty hadn’t quite worn off by the time we’d navigated through so was a little underwhelming. The chamber you enter at the maze exit contains an impressive diorama depicting a battle in 1648 on the Charles Bridge between Praguers and Swedes painted by brothers Adolf and Karel Liebscher (although when this was done is unclear). A little of the wonder was also lost due to restoration work being carried out at the time, but it was still marvellous to behold.

The next room however, had caused a bottle neck of fellow tourists: The Hall of Smiles (aka The Hall of Laughter) was a funhouse where distorted mirrors made hilarious and some mildly disturbing reflections which were worth seeing more than once. A great way to entertain ones inner child as all generations cackled and howled their way around the room together.

Back in the sunshine we made our way down the other side of the hill we sauntered through the Castle, passed a multitude of government buildings and I realised the complexity and immense detail of this ancient city, and how little I knew of it. The crowds grew a bit thicker as we made our way over the gorgeous Charles Bridge across the river Vltava, completed in 1402, where the view in any direction inspired me to existentially ponder life and the world. The bustle of venders selling trinkets alongside artists sketching caricatures reminded me of London which did detract a bit from the experience for me, but the gaze of the saint statues mounted along each side of the bridge brought me back to the moment.

View across the Vtlava River

Discovering some questionably coloured doves and their handler at the other side raised some ethical eyebrows among us, but by then we were hungry. An early dinner at the wonderful Clean Head restaurant was thoroughly enjoyable and I would definitely recommend visiting this vegetarian eatery with eclectically decorated rooms reminding me of a particular meditation nook at Temenos Retreat in McGregor, South Africa I’d visited years ago. It was odd to be reminded of such a specific memory so far away in both time and distance, but also wonderful to tie such separate experiences together.

Maybe the lady with her hand up gets it…

Fully satiated and weary feet slightly rested we made our way to the Old Town Square where the crowds condensed. The famous Astronomical Clock has just chimed and we had missed it by only five minutes, but even the alleviated congestion of people was proving a little too much for me so I wasn’t bothered about missing it. By then the sun had started lowering and while there was so much more to see, we had already absorbed so very much and it was time to consider our route home. 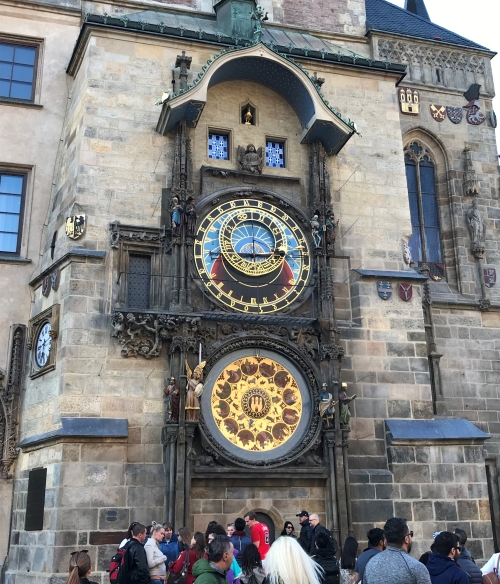 A stunning site, even with the crowds

Once my bag was collected from the train station we ventured back onto the Metro to make our next connection, a bus north to Prysk. Sitting in the air conditioned liner with my best friend next to me, sharing ear phones listening to our playlist made me rather sentimental. The sun had now set and I couldn’t see much of the passing landscape as it turned from town to forest as we tiredly scrolled through all the days’ photos and watched the vehicle Wi-Fi to struggle to share batches of pictures between us. We also joked about the last time we’d ventured out on a public bus together, in the Philippines, where they accommodated extra passengers (including us) by putting down tiny toddler sized plastic chairs in the centre aisle. Luckily we actually had real seats for this journey into the countryside, where more adventure awaited us. I knew I’d be back to see more of Prague in the future.

One thought on “Czech Yourself…”