We had arrived at our cabin lodgings in Prysk after our day in Prague in the pitch black. Darkness has a different velvety depth to it in the countryside (one forgets how much light pollution we produce in urban areas) so I could barely see what was in front of me approaching the house. Waking after a solid night’s sleep in the quiet surroundings, I had to admire the view out of my bedroom window, pinch myself to quite believe where I was, and then swallow the impulse to start singing the theme to classic cartoon Heidi. 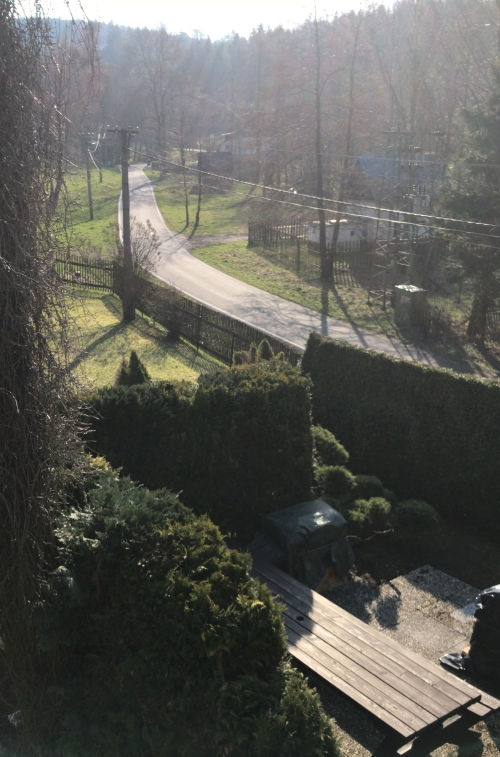 Soaking up the spring sunshine in the garden, we explored the village a little with another friend arriving to stay at the cabin with us. A little internet research has told me that Prysk has about 100 permanent residents, who will forever be known as the first to introduce me to the charming tradition of decorating one’s fence with old up turned mugs. 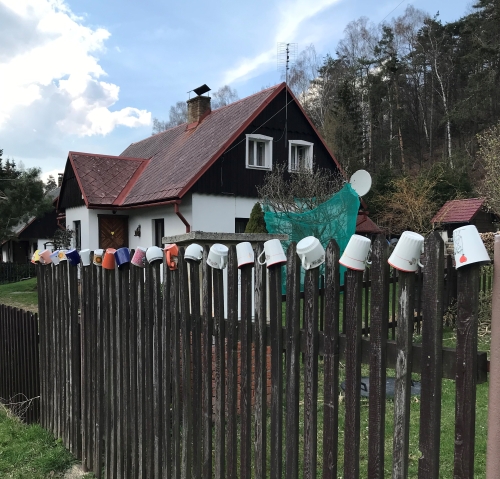 It was also hard to miss the Church of Saints Peter and Paul on top a hill along the road which I had to climb up and investigate. After nearly accidentally trodding on a well camouflaged sleeping cat I approached the gate, and found it locked, so had to appreciate the building from the perimeter. This 300 year old church was also painted a similar pale yet happy yellow to the mirror maze building we’d seen the day before. The church was in fact completely restored and consecrated only five years ago so no wonder it looked remarkably fresh. 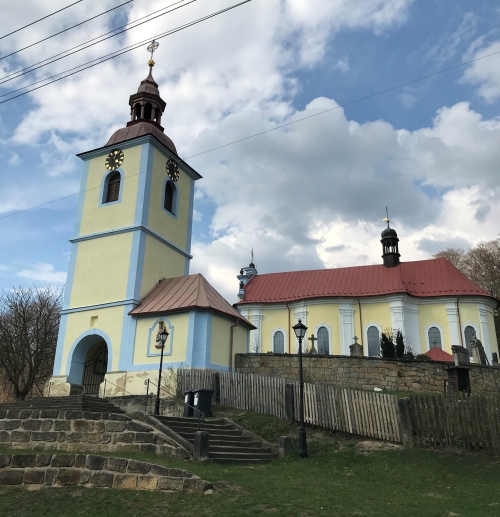 Church of Saints Peter and Paul

Back down the hill, we strolled to a local lido, quiet empty since this was pre-summer season, where we sat on some wooden steps and chatted. A little drizzle started to delicately fall so we decided to head up another hill to our left, and get some forest cover as a result. Climbing the steep steps covered in leaves and twigs I remembered the pine needle carpeted Sunday afternoon family hikes of my childhood. Reaching the top there was a bench and a gazebo offering great views of the church and the road we’d just walked down. The rain began to fall steadily and I found it so calming to shelter in such idyllic circumstances while watching the dramatic sky evolve as the clouds rolled over us. The friend who had just arrived had brought her ukulele and we even had a hilltop sing along. 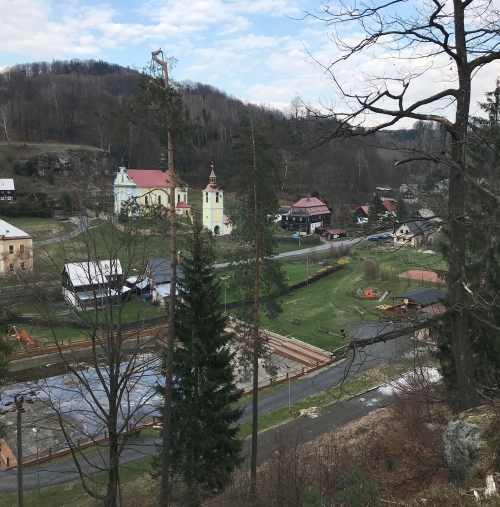 Heading back to the cabin, we welcomed more friends, old and new, and partied until the early hours. Rising a little later the next day, bodies scattered around the house and some feeling a little more fragile than others probably due to the ‘guess the flavour of this homemade alcohol’ game which had taken place. We all enjoyed an al fresco lunch and laughed about the night before. Some friends were staying on while others had to depart that day, one of whom we collectively decided to accompany her to a train station along her route to enjoy some local nature.

I had no idea where we were heading as we ascended into the forest, but I was happy to follow trusting at least one of us knew where we were going. The landscape changed dramatically as we entered the shadowy woods. Lush greens, moss and small plants growing from the roots of old uprooted trees, small rivulets running alongside the path, and a unique stillness in the air made me feel like we were the only people ever to venture in this direction. Commenting to my bestie that I could see how those classic fairy tales we heard growing up could easily have been inspired in these surroundings, and then we proceeded to joke about watching out for bears, quite a different animal to be wary of for us having been raised in Africa. 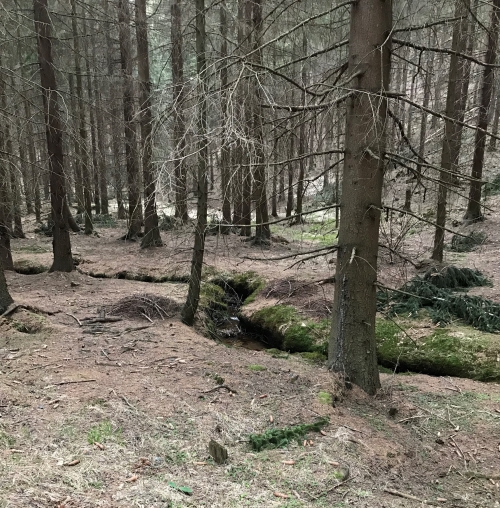 A real sense of enchantment

Trees started to give way to an occasional cottage, and as the housing became denser we saw taller buildings, many quite dilapidated, indicating we’d reached the next village. The time was such that if we picked up the pace a little we could walk our departing friend one stop further along her route which we decided to do. Walking through this village was equally charming, with the addition of pots being used to decorate fences along with the mugs I’d grown to love.

I didn’t see any signs indicating the name of the village we passed through, but a quick map search has lead me to believe it was called Mlyny. When we reached the next station station after a brisk walk we rested,  and I noticed the station sign: Kytlice. Bidding farewell to our friend, we continued on our wander towards a pond called Lesni Rybnik, loosely translating to ‘Wood Lake’. 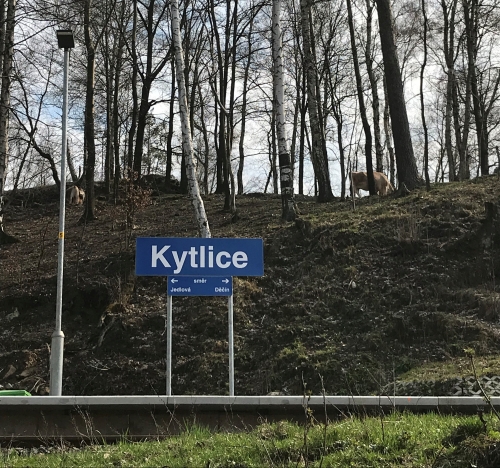 While some of our group decided to take a quick dip, very quick that is with the water being super cold, the rest of us sat on the bank snacking on nuts and watching the clouds roll in for what would be another brief drizzly shower; a very tranquil moment indeed. 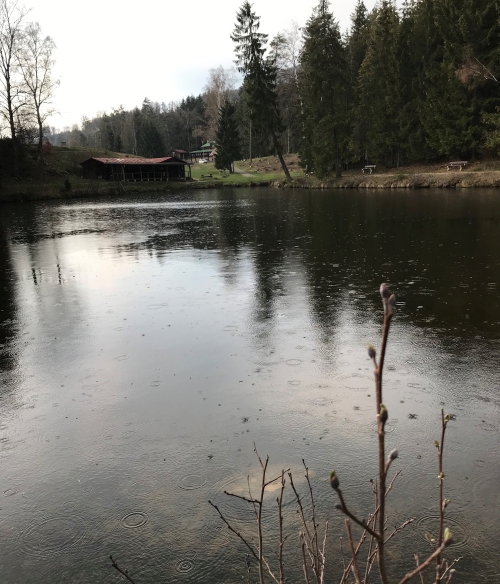 We then took a very scenic walk through to another village, where the rain started coming down properly and we sheltered under the covering over someone’s front door. We were joking that we’d been walking for a while, but yet every sign indicated we were still in Kytlice. To our surprise as we huddled, guests arrived to knock on the door of the house whose front door we were blocking. They joked we should all come in since they were there for a birthday party.

As the rain eased we climbed a tall hill passed the Church of Saint Anthony of Padua. The view was spectacular and it felt the landscape had come alive following the rain that had just fallen. Venturing back into the woods we continued to joke about whether or not we were still in Kytlice; finding the name carved into a tree what felt like hours later set us off in fits of laughter, and my bestie and I started scripting our own version of the Blair Witch Project; working title “Lost in Kytlice” 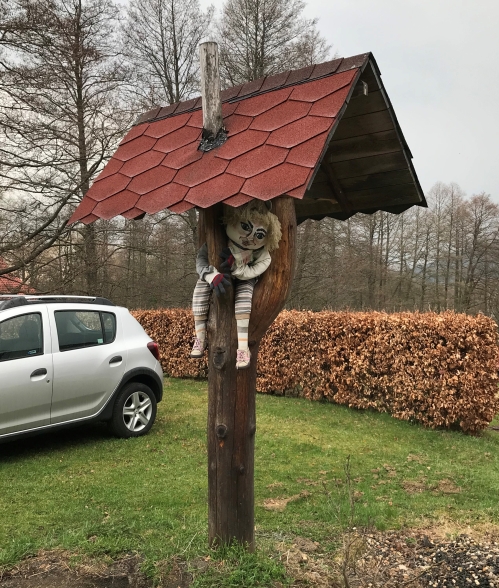 The last person who tried to leave Kytlice? 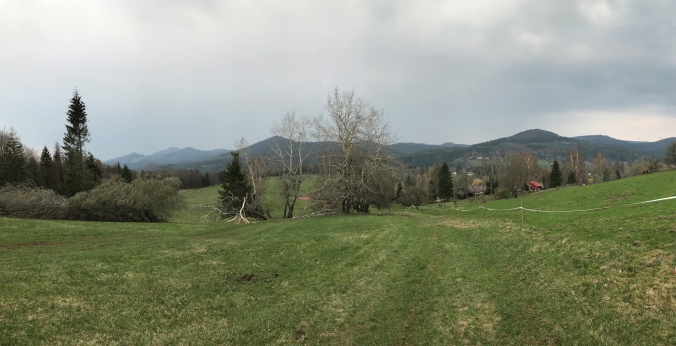 The landscape continued to evolve as we ventured deeper and possibly off a discernible path and by the time I started to recognise some parts of the surroundings as we headed back it seemed a contemplative mood had consumed us all. The whole group was walking with mostly uniform steps and without speaking, as if collectively meditating in the peaceful surroundings to our rhythmic stepping. I was partly delighted to reach Prysk again, my feet were making sure I knew we’d been walking for most of the day, but also sad the adventure was over, since the next day I would be heading back to normal life in London. I’d rather have stayed lost with my best friend in Kytlice. 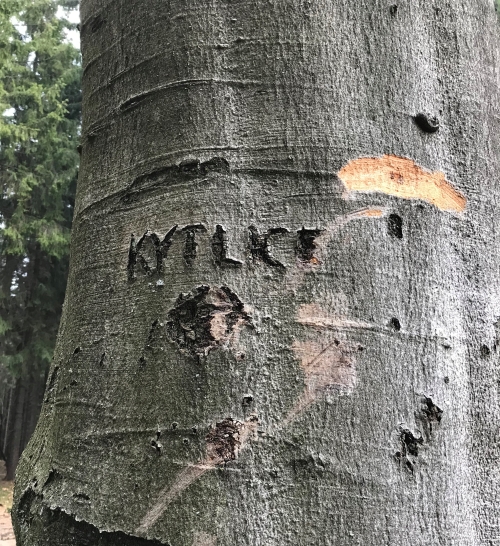